Major threats to the tiger include habitat destruction, habitat fragmentation and poaching for fur and body parts, which have simultaneously greatly reduced tiger populations in the wild.

In India, only 11% of the historical tiger habitat remains due to habitat fragmentation.

Demand for tiger parts for use in traditional Chinese medicine has also been cited as a major threat to tiger populations.

At the start of the 20th century, it was estimated there were over 100,000 tigers in the wild,
but the population has dwindled outside of captivity to between 1,500 and 3,500.

The global wild tiger population was estimated by the World Wide Fund for Nature at 3,200 in 2011 and 3,890 in 2015—Vox reported that this was the first increase in a century.

India is home to the world's largest population of wild tigers.
In 1973, India's Project Tiger, started by Indira Gandhi, established numerous tiger reserves.
The project was credited with tripling the number of wild Bengal tigers from some 1,200 in 1973 to over 3,500 in the 1990s, but a 2007 census showed that numbers had dropped back to about 1,400 tigers because of poaching.

Following the report, the Indian government pledged $153 million to the initiative, set up measures to combat poaching, promised funds to relocate up to 200,000 villagers in order to reduce human-tiger interactions, and set up eight new tiger reserves.

India also reintroduced tigers to the Sariska Tiger Reserve and by 2009 it was claimed that poaching had been effectively countered at Ranthambore National Park.

In the 1940s, the Siberian tiger was on the brink of extinction with only about 40 animals remaining in the wild in Russia.
As a result, anti-poaching controls were put in place by the Soviet Union and a network of protected zones were instituted, leading to a rise in the population to several hundred.
Poaching again became a problem in the 1990s, when the economy of Russia collapsed. The major obstacle in preserving the species is the enormous territory individual tigers require (up to 450 km2needed by a single female and more for a single male).

Current conservation efforts are led by local governments and NGO's in concert with international organizations, such as the World Wide Fund for Nature and the Wildlife Conservation Society.

In 2005, there were thought to be about 360 animals in Russia, though these exhibited little genetic diversity. However, in a decade later, the Siberian tiger census was estimated from 480 to 540 individuals. 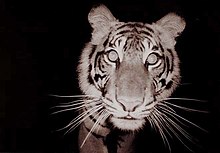 In 1980s China became a party to the CITES treaty. By 1993 it had banned the trade in tiger parts, and this diminished the use of tiger bones in traditional Chinese medicine.
The Tibetan people's trade in tiger skins has also been a threat to tigers. The pelts were used in clothing, tiger-skin chuba being worn as fashion.
In 2006 the 14th Dalai Lama was persuaded to take up the issue.
Since then there has been a change of attitude, with some Tibetans publicly burning their chubas.

The exact number of wild tigers is unknown, as many estimates are outdated or educated guesses; few estimates are based on reliable scientific censuses. The table shows estimates according to IUCN Red List accounts and range country governments dating from 2009 to April 2016.